This is what people say about Andy... past and present comments. 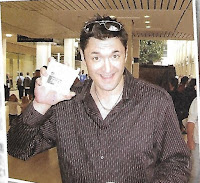 "I am a bit disappointed that there are no plans to do a little acting for him.

I've said it before but after seeing him in Amber Benson's movie Chance I think he is one of the most natural and engaging actors I've seen.

"Got to love the Andy-man. Andy is one of the greatest guest if you can get him to the place on time and even if he is a day late he makes it worth the wait. Then afterwords if he can, he will sit down in the bar or open area and just hold court for hours. However, if he says he'll be right back, best thing to do is call it a night cause he can get distracted easily and forget to come back. 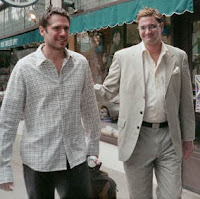 Alexis Denisof  - "I mean, I get a little choked up about Andy. I was looking at photos of Andy last night, because I dug into a box called “loose photos” in my office. I needed to get some stuff from my personal life for FINDING CARTER – they asked for a couple of pictures, so I was digging through that box, and I must have come across two dozen pictures of Andy, some of them of him on stage at the [BUFFY Posting Board Party] events we used to have in Hollywood, some of them with he and I at a signing, some of them at work – it just seems to be the Andy Hallett box that I struck, and it really hit me hard, how much I miss him and what a just spectacular person he was, what a rare and unique find. So I love you, Andy, and I miss you." (2014)


F. Taylor - “His manager was freaking out that day dring the signings. Nobody could find him. Turns out he went to the restroom. Her response was “you let him go by himself? He be anywhere by now!” lol. Apparantely he liked to wander around talking to people and always lost track of time and forgetting what it was he was supposed to be doing. Loved his fans to pieces.
Such a cool, amazing, energetic guy”. -  Facebook (2016)

Paul Simpson - "Talking to Andy Hallett can be a hazardous business. You can be in the middle of a serious discussion about something related to his career, or an odd occurencedurgint he filming of Angel, and suddenly he will get a fit of the giggles. And, worse, they're infectious. Wherever he is, the room seems to come to a full stop, and the only spound audible is his giggling around him" -  Starfury Q'uor Toth. June 2005.  London (UK).

Joss Whedon - "I only hire incredible talented people with no experience, so I don't have to do a lot of work. Believe m. I've hired a lot of people with a ton of experience who couldn't walk through the door. I've been lucky". Joss Whedon talks to Zap2it.com about great casting finds such as Andy Hallett.

Christian Kane – “Andy was a great friend of mine. We went all over Europe together. He was a good friend and a really good guy…It's hard for me to talk about, I get really choked up... He was such a great guy and I really hate that he passed" – July 22, 2009. 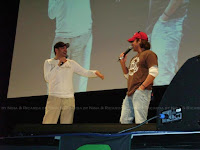 Sam Tweedle – “It was that distinctive voice from Angel that had a certain warmth and melody in it, even when he wasn’t singing.  Andy signed a photo of Lorne for me and we wished each other well.  I doubt I made much of an impression on Andy beyond one of the many hundreds of people lined up to meet him that day, but Andy made an impression on me.  It was obvious that Lorne and Andy were one of the same.  When I meet many celebrities I find that they are not at all like their characters, but although his skin wasn’t green and he had no horns, meeting Andy was like meeting Lorne himself “ – Read More Here 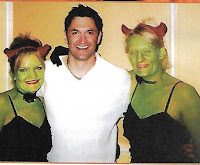 "I miss my friend desperetaley,but I take solace in the fact that I know, at this very moment, he's singing somewhere" Mark Lutz on Angel "Lorne" book, 2010 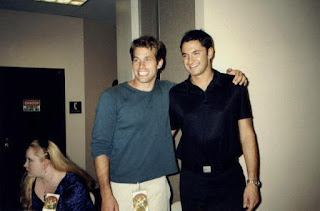 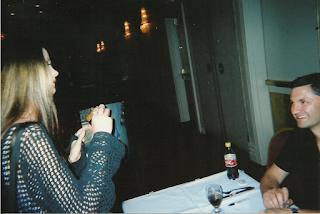 "He looked right over at us, and made the cutest, most genuine smile I have ever seen and topped it off with a little wave. Now I have to say, that to this day, when I think of Andy, that is the image that I see in my head. It can never be damaged or replaced."
Angela Sorensen. 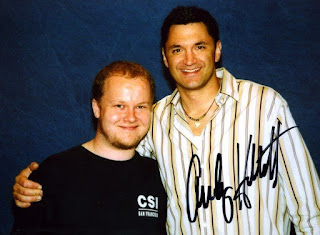 "In short, he was the person in real life that you hope your favourite actors will be. I still think the world is worse off without him.

When you think of some of the vile people still in the world, it just rubs salt in the wounds that we lost someone so very special.

He was a truly wonderful man. " Mark B.


If you want to share your memories or thoughts on Andy, drop me a line to be included here. I'll love to read all you have to say. Let's make this big! 😋

P.S. On the contrary, if you want to be removed from this section, contact me. I don't pretend to violate anyone's private life.

Popular posts from this blog

Time flies. A month passed by since I last wrote in here. Life's been busy and bright! But I am sure you don't want to read about me, but to know about Andy and my life around him. I actually have few things to share but first things first. Few days ago I got an email from Wayne He shared his photo with Andy and the memories on that moment, I just love so much when this happens!! The photo was taken at the Buffy Posting Board Party in L.A. in 2001 . "Andy was such a delight! I told him I thought it was Quentin Tarantino under all that makeup the first time I saw Lorne on Angel, and he thought that was so funny he had to tell his manager, who was also there that night. " Wayne Chapman. Thank you Wayne for sharing this with me and all Andy fans. What an awesome photo and moment!
Read more

The Dream I had last night.

I had a dream tonight. I fall asleep at a foreign bed, I woke up into another reality. Everything was so bright, so clean, so peaceful. I went out of the bedroom. I heard a water sound on the room next door. I looked out the doorstep and there you were. Big smile, full of joy and looking like you were never gone. When I woke up I could only remember how much I miss you. The peace your smile always provides me, real or not. Thank you these magic moments. Real or not.
Read more

When I thought I was going to have a heart attack! 💚

It happened.  I never thought it would. Ok, that's not exactly like that. I expected to happen sometime but I completely forgot It could happen. I was too focus on my career (again), on my family on my present, on my pure joy of living today and not the past or present that I completely forgot something else could happen. Beautiful wonders of Internet. But I tell you something, past always knocks on you when you least expect. It always happen. A very lovely lady contacted through Instagram. This site's Instagram. She told she found my site and liked it.  She is friend of Andy's mum, Laurie. She also told me Laurie knew about this site (😱). If you are suscribed to this site (and are part of Facebook and/or Andy Hallett Online Community ) you might have read already about this. I needed to share here because it's been over a week since it happened, my emotions are back to normal, I have calm down and I can see how much of a shock that was. S
Read more