Although it would be easy for me to copy paste form Wikipedia and Imdb, both awesome sites, I think I'm gonna try and bring my own summary here.

As you have already read, Andy Hallett (full name's Andrew Alcott Hallett) passed away on March 29th, 2009 from a heart failure at the early age of 33. He is best known as the empathic, singing and charming green-skin demon Lorne (The Host) from Angel The Series, Buffy The Vampire Slayer's spin off.

He had a very short and intense career on the beginning of the 2000s.

Andy Hallett was born in a tiny village (Osterville) of Cape Copd in Massachusettes (USA) on August 4th, 1975. He raised as an only child by his parents Laurie and David.

He graduated from Management at Assumption College in Worcester (MA) in 1997 where he majored in Business with an emphasis on Management Marketing.

Always shy and unconfident he started singing only after Patti Labelle invited him to sing onstage and surprised all the attendees and Patti Labelle herself with an oustanding Lady Marmalade performance (duet with Labelle), That was, in Andy's words, a "life-changing experience". Just short after that, he drove to L.A. to follow his dreams in  Hollywood.

Andy had numerous jobs to make ends meet, including work as a runner, property manager, personal assistand and few non-speaking roles in a couple of commercials.  He didn't even had an agent back then! He got one after he appeared for the first time on Angel as anagonic demon Krevlornswath of the Deathwok Clan. 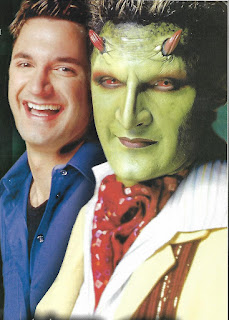 Andy was supposed to spot in just 45 episodes of the show but ended making 76 episodes out of 110, and become regular on season 4 (episode 14).

A friend of Joss Whedon's sister-in-law since high school, Andy invited Joss to see him sing at BB King's Blues Bar in Hollywood in Universal City where he had landed a job as a lounge singer. Watching Andy sing inspired Joss to conceive the character of The Host, and Andy was invitred to try out for the part. And after three auditions he got the part, his first proffesional acting job. 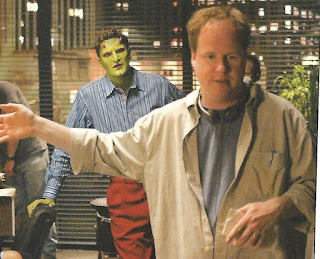 Andy taught himself to sing. He learned how to chance range and how to breathe properly by watching tapes of Frank Sinatra and Patti Labelle, both whom he regarded as two of his greatest musical influences. His favourite musical genre was traditional R&B.

He used to hang out regular with Alexis Denisof and J. August Richards. He was best friends with Mark Lutz (Groosalugg) as well as neighbours. They both made a trip together to Europe.

You can read about a tribute 48-page book "Lorne" where Mark Lutz talks about Andy and get a briefly inside of how was to be a friend of his. You might be lucky and get a copy through Ebay. 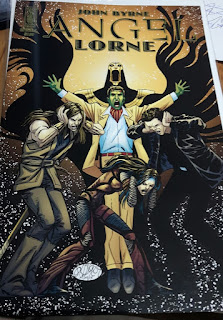 Reaching this point if you still want to know more, make sure to visit Quotes and Career for further details, and visit They Say to see what people say about our late but very dear Andy Hallett.


P.S. Feel free to contact me if you notice anything missing or mistaken data.

Popular posts from this blog

Time flies. A month passed by since I last wrote in here. Life's been busy and bright! But I am sure you don't want to read about me, but to know about Andy and my life around him. I actually have few things to share but first things first. Few days ago I got an email from Wayne He shared his photo with Andy and the memories on that moment, I just love so much when this happens!! The photo was taken at the Buffy Posting Board Party in L.A. in 2001 . "Andy was such a delight! I told him I thought it was Quentin Tarantino under all that makeup the first time I saw Lorne on Angel, and he thought that was so funny he had to tell his manager, who was also there that night. " Wayne Chapman. Thank you Wayne for sharing this with me and all Andy fans. What an awesome photo and moment!
Read more

The Dream I had last night.

I had a dream tonight. I fall asleep at a foreign bed, I woke up into another reality. Everything was so bright, so clean, so peaceful. I went out of the bedroom. I heard a water sound on the room next door. I looked out the doorstep and there you were. Big smile, full of joy and looking like you were never gone. When I woke up I could only remember how much I miss you. The peace your smile always provides me, real or not. Thank you these magic moments. Real or not.
Read more

When I thought I was going to have a heart attack! 💚

It happened.  I never thought it would. Ok, that's not exactly like that. I expected to happen sometime but I completely forgot It could happen. I was too focus on my career (again), on my family on my present, on my pure joy of living today and not the past or present that I completely forgot something else could happen. Beautiful wonders of Internet. But I tell you something, past always knocks on you when you least expect. It always happen. A very lovely lady contacted through Instagram. This site's Instagram. She told she found my site and liked it.  She is friend of Andy's mum, Laurie. She also told me Laurie knew about this site (😱). If you are suscribed to this site (and are part of Facebook and/or Andy Hallett Online Community ) you might have read already about this. I needed to share here because it's been over a week since it happened, my emotions are back to normal, I have calm down and I can see how much of a shock that was. S
Read more